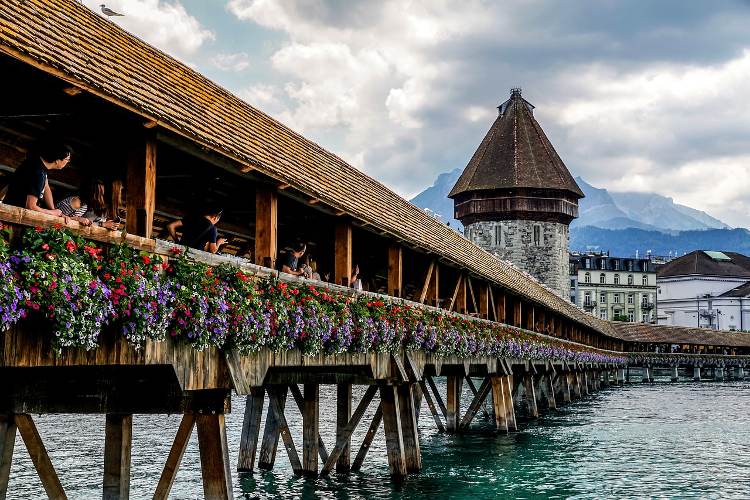 Traveling to Lucerne and you want to know more about its iconic Chapel Bridge before you get there? Then you’ve come to the right place because this guide will tell you everything you need to know about the iconic covered wooden footbridge!

I’ve covered the bridge’s history, the fire, and the paintings, among other things. Whether you’re the designated tour guide of your friend group or you just like to be prepared, you’ll find all the information you need about the Lucerne Chapel Bridge right here!

The Chapel Bridge on the Reuss River in Lucerne is easily the most famous landmark in this town. It’s also one of the most famous bridges in Switzerland, with a rich history that dates back to the 14th century. The wooden bridge was originally constructed in 1360, and the Wassertum is even 30 years older than the bridge.

The Wassertum translates to the water tower, but in the sense of a tower standing in the water. It has had many different functions over the years, and at one point in time, it even served as a prison and a torture chamber. It was later used as the town’s treasury and municipal archive, and nowadays the water tower is closed to the public. So, even though you pass very close to the tower while on the bridge, you won’t be able to open the door to enter it :>

The iconic bridge serves as a pedestrian walkway from the north to the south bank of the river Reuss. It’s one of two covered wooden bridges in Lucerne that connect the two sides of the city’s old town. On the north bank, the bridge is immediately next to St. Peter’s Chapel, which is also how the bridge got its name.

Paintings At The Chapel Bridge

Lucerne is famous for its three footbridges that date back to different time periods, all of which are adorned with paintings. No other such bridges in Europe exist, which is precisely why these covered bridges are such iconic tourist attractions.

The Chapel Bridge is special because so many paintings have managed to survive the horrific fire and they are still standing proud. It’s possible to notice the fire damage on some of them even today, which just makes the bridge and its paintings even more special.

Before the fire, there was a painting in every one of the triangular frames below the roof. Nowadays many of the frames are empty or charred, but more than 100 paintings can still be seen on the bridge. They contain scenes that promote the Catholic Church and those that depict life in Switzerland during the existence of the Swiss Confederacy. Many paintings feature images of Lucerne’s Patron Saints: St. Leger, and St. Maurice.

Fire At The Chapel Bridge

In August of 1993, the Chapel Bridge caught fire in a historic event that caused irreparable damage. A big part of the bridge was entirely destroyed, and a thorough reconstruction followed in the coming years.

The exact cause of the fire was not established, but it is presumed that it all started because someone carelessly discarded a cigarette. The assumption is that the cigarette lit the boat under the bridge on fire, which then set aflame the wooden bridge. The fire on the Chapel Bridge spread rapidly, and within minutes the supporting beams and the roof were ablaze.

One tiny spark was enough to rid Lucerne of its most famous landmark, in an event that is still remembered by many locals. Several historical paintings that adorned the covered bridge’s roof were entirely destroyed, but luckily many were salvaged.

The Reconstruction of the Chapel Bridge

The Lucerne Chapel bridge has always been an important city landmark, so repairing it quickly was crucial after the fire. The reconstruction of the bridge started very soon after the fire, and it lasted for less than six months. A total of CHF 3.4 million was spent during the reconstruction, which partly returned the iconic bridge to its old glory.

The reconstruction of the bridge solved the problem of damaged beams and planks, but not much could be done about the famous paintings. Many of them were lost forever, and evidence of the horrific fire still stands in place of the missing paintings, even today.

There Were Three Wooden Bridges

One interesting thing I learned while visiting the Gletscher Garten near the Lion Monument was about Lucerne’s former third wooden bridge.

Today only the Chapel bridge and the one further downstream, the Chaff bridge (Spreuerbrücke) still remain. Both are stunning examples of covered wooden bridges with paintings adorning their inner roofs, but I was stunned to learn there was a third one.

Back in the middle ages, the Chapel bridge connected to a building in the old town and then lead to a third bridge called the Court bridge (Hofbrücke). The bridge lead from the Kapellplatz (Chapel Square) in the old town to the Court Church in the distance, crossing 385m over the lake. It was the longest and oldest of the three bridges and was also filled with religious paintings dating from the 16th century.

Unfortunately for us, the bridge was dismantled in the 19th century to make way for an embankment along the lake. Progress has it’s price I suppose.

Wake up as early as you can. The beautiful Chapel bridge is usually empty in the mornings, and if you can manage to beat the crowds you’ll have the best experience. You won’t bump into others while trying to cross the bridge, you won’t have to say excuse me every other second, and you’ll be able to enjoy the panoramic views of Lucerne and the beautiful paintings.

I also found that visiting in the shoulder season made things easier. I was there again this November and it was sunny but cool. And the bridge was quiet even at 11 am. So, even if you come during the day, it’s ok in the off-season.

Don’t forget to look up. The triangle paintings are on the supporting beams of the roof, so you will have to look up if you want to see them all. It’s easy to forget about them because so many paintings were destroyed in the horrific fire and many of the beams are empty or charred. But the paintings are the main reason why the bridge is so popular, so looking up is one of the key things to do on the walk!

This historic bridge is open for visitors 24/7. It’s an open bridge used to cross over from one side of Lucerne to the other, so you can walk over it whenever you want. There’s no entrance fee or ticket for the bridge – you can just show up and walk across it whenever you like.

On the other hand, because it’s the most popular tourist attraction in the city and it’s free of charge, it’s smart to plan your visit ahead. The bridge can get quite crowded, especially during peak season (summer, middle of the day). Weekends are the worst time to visit the Chapel Bridge because the crowds will force you to move at a glacial pace.

The bridge is at its busiest starting at 3 PM and onwards, so I would recommend going as early as you possibly can to skip the crowds. It usually takes about an hour to really see the bridge, take in the paintings, and photograph the pretty views. Just walking across the bridge shouldn’t take more than 5 minutes.